You are welcome to BYO food and drinks – including alcohol. There are also vendors, including a bar, at the venue. Free water also available.

You are welcome to BYO chair, blankets and even small tent or shelter as long as you erect it away from the front of stage area.

You can NOT bring glass, drugs or animals.

Unfortunately there are no bus services this year. Organise your driver, and park at the park for a $3 donation to the Berry’s Creek CFA.

Honouring that old school Motown sound and working it into something of their very own, Australian four piece The Teskey Brothers stunned many in 2017 with their gorgeous debut album Half Mile Harvest. A raw combination of soul and blues, the record has warmed the hearts of listeners everywhere. Following a hugely successful debut tour of Australia through July/August, The Teskey Brothers made their first international appearances in October this year with sold out headline shows in LA, New York and London. Listening to The Teskey Brothers you’d be forgiven for thinking of Stax Records alumni in Memphis circa ‘67 rather than a group of twenty-somethings from the Yarra Valley near Melbourne. Onstage singer Josh Teskey’s smoked whiskey voice defies expectation while the band around him hold an irresistibly tight groove beneath heartfelt soulful melodies.

Saskwatch are back with their fourth album, Manual Override – a sonic kaleidoscope where ever-changing soundscapes and colourful patterns neatly evoke elements of neo-psychedelic, indie-pop and soul. Manual Override marks a special moment for the band as it’s the first time the six-piece outfit have co-produced & mixed their own work, alongside sound engineer and long-term friend Cal Barter in Newmarket Studios, Melbourne.  Manual Override is rich in moods and playful in its progression. It’s a tour-de-force that consolidates Saskwatch as a band that’s eager to explore, confident in their musical abilities and capable of producing a powerful, timeless album. It’s experimental and playful nature blends genres and feels liberating, producing a record that sounds earnest, mature and timeless.
Four albums in, Saskwatch have rubber stamped their status as one of Australia’s premier live acts.

Caiti Baker writes songs about what she knows and feels, sings with her soul and unashamedly performs the hell out of them. But that will all be obvious when you hear her music and watch her perform, which will have you either dancing or chilling with a grin on your face.

Acoustic Guitar, Electric Guitar and Upright Bass but it’s the 2 and 3 part harmonies and varied lead vocals that give The Rechords it’s individuality and punch. Known for their live performance energy on stage and hypnotic melodies and infectious rhythms. 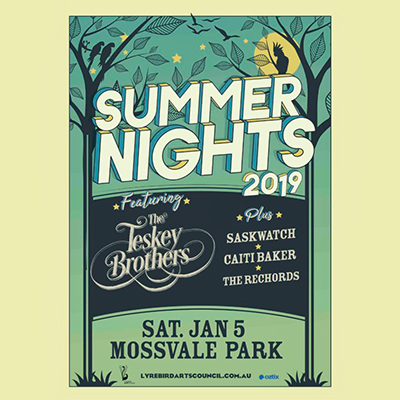