https://youtu.be/n1oQis8FM90
Imagine a young woman with a powerful soulful voice that nails the classic 40’s,50s and early 60s R&B and rock and roll sounds. Match that with a great stage presence and drop-dead gorgeous looks with a perfect visual adherence to mid-century vintage style. Now combine her with the killer rockabilly instrumentation of slapping upright bass, swinging drums and virtuoso guitar and you’ve got Tammi Savoy and The Chris Casello Combo.
Tammi grew up listening to classic rhythm and Blues, rock ’n’ roll and jazz. She is the baby sister of the multi-platinum contemporary R&B Group “Next”. Tammi however digs deep into the roots of American soul. She effortlessly captures the feel and sounds of Ruth Brown, Laverne Baker, Sarah Vaughan and other greats. Tammi Savoy is also the 2019 Ameripolitan Award recipient for Female Rockabilly Artist.
Chris Casello is a veteran of Detroit, Nashville and Chicago music scenes. He was the 2017 Ameripolitan Award recipient for Musician of the Year and voted Nashville Scene’s “Honk Tonk Hero” and Critic’s Choice in 2012. Chris is also a 2nd generation inductee to The Rockabilly Hall of Fame, and enjoyed long working relationships with ‘50s greats including Johnny Powers, Jack Scott, Billy Lee Riley and the truly legendary Bo Diddley. He has also worked professionally with Wanda Jackson, Wayne Hancock, Marty Stuart, Rosie Flores and others. He has performed everywhere from The Lincoln Centre to the Grand Ol’ Opry.
After meeting at a gig in Chicago a couple of years ago, Tammi and Chris started jamming and recording. The recordings from those sessions started receiving an overwhelmingly enthusiastic response from those who were privy to hearing them. The group has released a six song CDEP and a 7” vinyl record on Swelltune Records and has made appearances at Viva Las Vegas, The Nashville Boogie, The New England Shake-Up and numerous other festivals – from rockabilly, blues and jazz to hot rod shows – in the U.S. and around the world.

Tickets all one price: $65  (includes all bkg fees and GST). 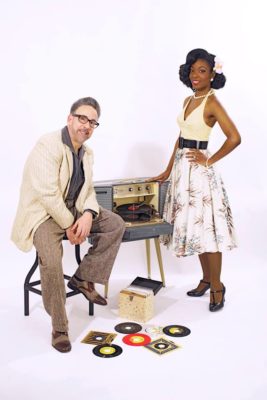