After a national run of sold out shows with his band Something For Kate, Paul Dempsey returns to the stage this May with a string of intimate solo performances in regional Victoria. This tour will see Dempsey return to some of the towns and stages he most loves. Performing songs from his two solo albums – 2009’s Everything Is True and 2016’s Strange Loop – as well as the odd perfectly curated cover, these will be Dempsey’s first solo shows in over a year and surely not to be missed!

Equally masterful alone on stage, armed only with an acoustic guitar and his voice as is he is backed by his band of over 20 years, Paul Dempsey is one of the country’s most treasured and original artists – one whose power as a performer only ever seems to grow over time. Whether he’s musing on the existential angst of A.I. or exploring the possibility of romance in an apocalyptic traffic jam, Dempsey’s inspiration lies well beyond the usual realms of rock n roll, ensuring his songs are always thought-provoking, insightful and never predictable.

Don’t miss your chance to catch him this May! 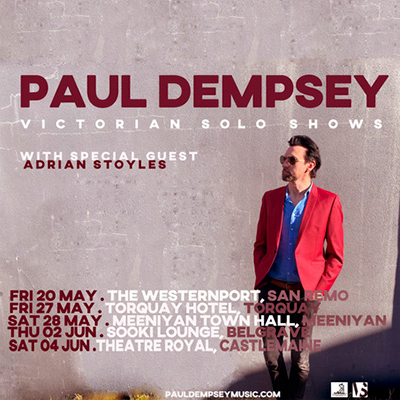