Springtime are heading out on a national tour to celebrate the release of their debut self-titled album, in store now via TFS Records & Joyful Noise.
This will be the first-time fans will be able to see them playing their album in full live.

“I love this shit. It’s as monstrously ravishing as it is clumsy in its elegance. Words run into each other with little regard for one another’s injuries.
There are sounds who come out of nothingness to wallop and brutalise their fellow sounds.
This Springtime record is so full of strange wanderings that are broken and piled up on themselves that the heads have no idea where their tails are.
These three gentlemen work, play and improvise together in an emotionally volatile universe. You could call it “jazz”, but that word is way too jazzy for what Springtime creates. There is no pompous audacity. No terrible flagrancy. Their music is heartfelt. It’s important.” David Yow

“It’s entrancing to hear how these three adapt to each other from song to song. It may not be easy listening, but it does feel the scorching culmination of what these three players can do together.” The Australian

Watch the clip for Will To Power

Watch the clip for The Viaduct Love Suicide 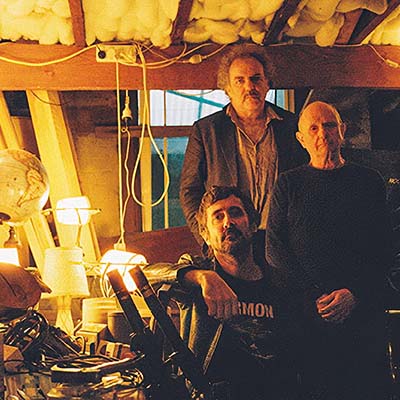