Sarah McLeod, the singer and guitarist with the ARIA Award winning, platinum-selling rockers The Superjesus, has since gone on to establish an acclaimed solo career. Her legion of fans will be seeing and hearing a whole other side of Sarah McLeod when she hits the road for her first “electric” tour. Sure, they’ll hear their favourite songs, not only from her last solo album, 2017’s Rocky’s Diner, and even a few from her solo debut, 2005’s Beauty Was a Tiger, but also songs from the band that put her on the international map, The Superjesus – only not how you remember them. “I’ve rewritten The Superjesus songs as beautiful piano pieces, to give them a different edge – or lack of edge.”
McLeod will be performing solo on her upcoming tour, and this powerhouse and self-confessed lover of touring has some seriously impressive plans for the shows, explaining, “The One Electric Lady Tour is a bridge between where I’ve been and where I would like to go. Before covid hit, I was about to embark on a national solo electric tour. During lockdown I have been teaching myself how to play piano and am loving it. So this tour will be the best of both worlds, two sets of completely different styles. One set is a stand up rock show that if you closed your eyes you’d think there was full band on stage, but it’s just me. And the other set is me alone on the piano.”

Tickets all one price: $30  (includes all bkg fees and GST). 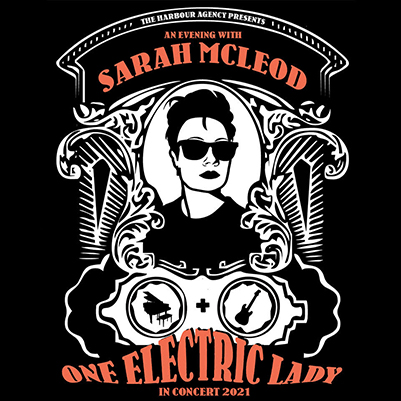