As The War and Treaty, Michael and Tanya Trotter serve up healing and pain robbing with freewheeling joy on their new full-length album, Healing Tide. Funky bass lines, keys, lap steel, acoustic strings, and stripped-down percussion create a swampy Southern soul bed for the couple’s transcendent vocals. A tour-de-force produced by Buddy Miller, the collection swaggers with confidence only gained by artists who are wholly, proudly, themselves.

Michael is a wounded warrior who found his voice while serving in Iraq, when he was pulled from the frontlines to write songs for the fallen. Tanya is a lifelong artist, drawn to singing’s power to take another’s pain away. “You have to have a deep place of love within yourself to be vulnerable,” Tanya says. “With The War and Treaty, we allow people to see two people that are not perfect. We get on stage. We sweat. We’re overweight. We yell. We get ugly, we scream! My hair comes loose. We’re vulnerable––naked––in front of people, and it’s a chain reaction. It allows them to be vulnerable, too.”

The War and Treaty’s music and stories bring tears and goosebumps, but ultimately, more is at work. “I want people to feel like we care,” Michael says. “When you think about artists, you don’t think about that.” He pauses and grins broadly. “But that’s the way I want the world to feel about The War and Treaty.”

Fenn Wilson will be making his way down to Meeniyan Town Hall in support of The War and Treaty. With a baritone that is resonant and expressive, Fenn’s songwriting forms a snapshot of his recent past; brushes with heartache, depression, world-weariness and uncertainty, and often lightened with compassionate observation, love and redemption. Think George Ezra with Nick Cave’s early song book.

Tickets all one price: $65  (includes all bkg fees and GST). 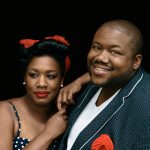