For Jim and George it will not only be their first Australian show in two years but the first time the pair have been in the same room in that time, their last confirmed sighting being Castlemaine, Victoria the day before the world turned upside down. In their time apart though, they have not been idle.

Jim learnt to record at home (in Australia) while George taught lute on zoom from Crete. They worked on lots of music along with silent third member of the band, producer Guy Picciotto, including a sound track for UK filmmaker Rebecca E. Marshall. As well as a deep archive of finished and unfinished music, Jim would record at home and at Guy’s studio in New York City and send files to George who would add layers of lutes and lyra ideas and Jim would overdub. Similarly, Guy would combine, excavate and create.

They have a new album ready; their fifth, but now it is time to perform live.

“There’s a fearlessness to their playing: their knowing glances and nods reveal their shared intuition, and the occasional clunky moment comes as both a natural side effect and a welcome wrong-footing during an evening that is endlessly and joyously fluctuating” – The Guardian 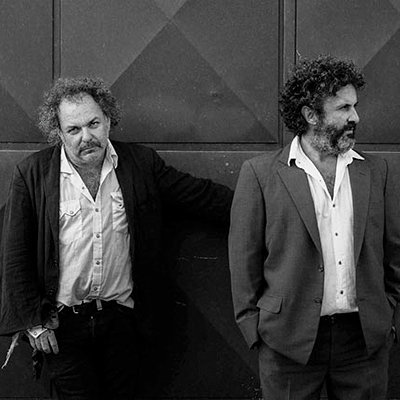